Sunset Strip hotel will now open in August as The Jeremy 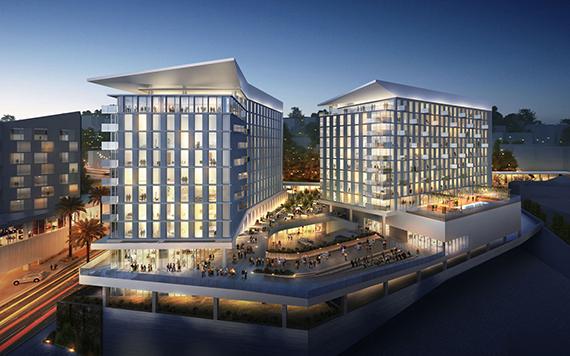 There’s another twist in the saga of the hotel in the Sunset Strip’s Sunset|La Cienega development.

A hotel called the Jeremy is now slated to open in the space, and, in a slightly confusing turn, the Jeremy is only planned to be open for about a year or so.

In that time, the Jeremy “will be transformed into the 1 West Hollywood,” the hotel’s new owner, Starwood Capital Group, announced Thursday. Representatives for Starwood Capital did not respond to requests for more details about the changes they’ll be making to turn the space into a 1 Hotel, which advertises itself as “eco-conscious luxury sustainable brand.”

An opening date for the 1 West Hollywood hasn’t yet been announced.

Opening a temporary hotel is a smart financial move, says WeHoville—it will allow the property to generate revenue for what’s likely a pricey overhaul of the hotel, and it will also produce hotel room occupancy taxes for the city of West Hollywood.

The Real Deal reports that a sign for the Jeremy is already on the building. The Jeremy’s website shows the opening date as August 11, and uses all the same promotional images that the planned James hotel did.

This content is not the product of the National Association of REALTORS®, and may not reflect NAR's viewpoint or position on these topics and NAR does not verify the accuracy of the content.

Find your next home

Home is where the start is

Please provide your name and email

Thank you for contacting us, we'll get back to you shortly.

Sorry, we are unable to send your message at the moment. Please try again later.